This is a book called The Hunger Games by Suzanne Collins, it is good.
This is a Voicethread by Maggie,

This is the last book in the Harry Potter sceries, and my favorite. I hope that you like it just as much as I do.

This is a Voicethread of the book, I made it and hope that you like it.

This is the 6th book in the Harry Potter series and it is fabulous!!

This is the summary:

Harry is in his 6th year at Hogwarts. Harry is now the Qudditch team captain. Harry is very happy that he is taking privet lessons with Dumbledore and learning all about You-Know-Who’s past. And Harry has this book who was one owned by “The Half-Blood Prince” but who is he? Harry keeps a very close eye on Draco Malfoy, who has managed to do something very bad, and when a very important person, that Harry loves dies, what will he do? Find out in Harry Potter and the Half-Blood Prince. 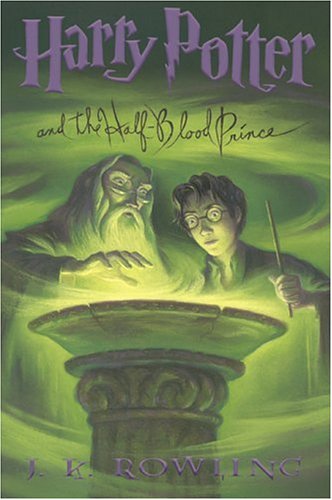 This is the cover of the book and the works cited, so click on it.

Harry Potter and the Order of the Phoenix is the 5th book in the series and I think that this is an amazing book just phenomenal!

This is the summary of the book:

During his 5th year at Hogwarts, Harry is learning so much. But when he starts having visions he is so confused. Hagrid is missing and they have a new Defense Against The Dark Arts, none other than the most repulsive Dolores Umbridge. At night these visions are the worst thing, he feels like he is You-Know-Who. Why is this happening? He helps save Mr. Weasely, and in the end he, Hermione, Ron and 3 others will battle against some of the worst Deatheaters. What will happen? Someone will die, but who is it? Is it more than one person? And why are you getting the feeling that Dolores Umbridge is so important? If you want to find out than read Harry Potter and the Order of the Phoenix.

click on the first picture for the works cited!!

This is the cover of the book and the works cited.

This is the D.A. meaning Dumbledore's Army. To find out more about them, read the book.

This is my favorite book in the series and I hope that you like it to.

The summary for Harry Potter and the Goblet of Fire:

Harry was in his 4th year at Hogwarts School of Witchcraft and Wizardry. Dumbledore announced that this year would be the Triwizard Tournament. Two other schools would be joining them to compete in the event. they would place their names in the Goblet of Fire. The night when they would have the drawing was here. Soon all three competitors were chosen, but one more name came out. Harry Potter. Threw all the competitions, Ron was mad that Harry got in and he didn’t. The competitions were hard, only 3. And in the last, a member will die, and Harry is faced with You-Know-Who…

Read more in Harry Potter and the Goblet of Fire.

This is the Goblet of Fire when someone is putting their name in it.

This is all the stuff from the movie, but I would advise you to read all the books before you watch the movie. 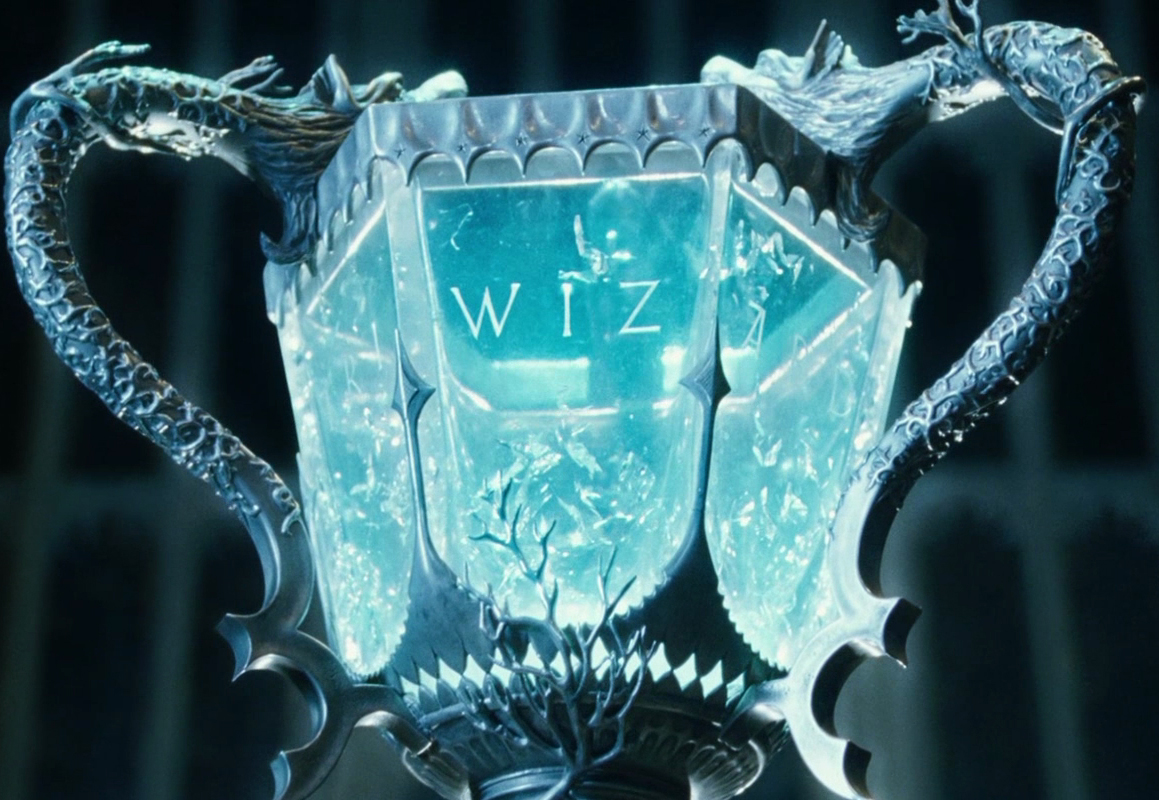 This is the Triwizard Cup, you can win this in the third competition.

And this pic below is the link to the works cited!! 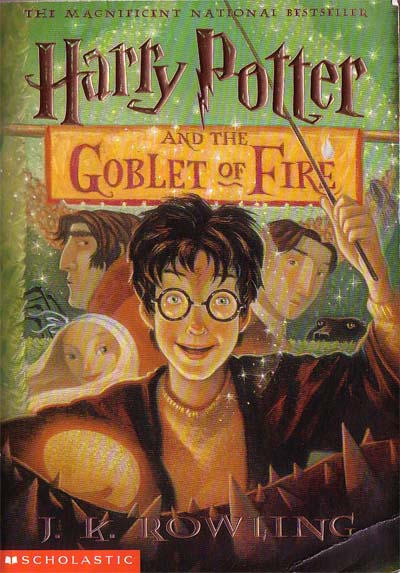 This is the cover of the book and the works cited, so click on it!

This is the third book in the Harry Potter series and this is where the books really start to get a little bit more interesting.

This is the summary:

For his third year in a row, harry was going to go to Hogwarts. Sirius Black has escaped from Azkaban, the wizard prison. Now the school is heavily guarded with Dementors. They suck the happiness out of everything and make you go cool. Threw out the year things are going okay for Harry, Ron and Hermione.  Soon Scabbers, Ron’s rat goes missing and he blames it on Hermione’s cat, Crookshanks. As they find out that Ron’s rat is someone who was believed to be dead, Harry uncovers an unexpected secret…

To find out what happens to Harry, Hermione and Ron, read Harry Potter and the Prisoner of Azkaban.

!! click on the cover of the book for the works cited !!

This is the cover of the book, and the works cited.

This is the second book in the Harry Potter series. It is just as good as the first but I would have to say that The Deathly Hallows is my favorite.

Here is the summary:

Harry has started his second year at Hogwarts School of Witchcraft and Wizardry. He is learning a lot about magic and having fun. Soon someone or something that calls its self “the heir of Slytherin” is writing on the walls and killing- or trying to kill students that are from not all magic family’s. Students are on guard and it is up to Harry, Ron and Hermione to get to the bottom of the lingering question, “what is trying to kill us?”. On top of all that they have a teacher that is full of himself. In the end it comes down to Harry and “you-know-who”… To find out what else happens, Read Harry Potter and the Chamber of Secrets. 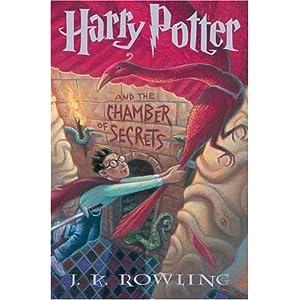 This is my favorite series and I LOVE the way J.K. Rowling writes. This is the first of 7 books.

Harry Potter was no ordinary boy. He lived with his Aunt and Uncle, who had a son and they thought way to highly of him. One might say that they never knew by how good Aunt Petunia and Uncle Vernon treated him, but to Harry they were just mean. One ordinary morning, on one not-so ordinary day, Harry woke up in his broom closet under the stairs. This morning Harry received a letter in the mail, he had never had mail before. Uncle Vernon would not let Harry open the letter and soon the letters were pouring into the house. They were coming down the chimney, threw the windows and the mail slot. the family and Harry left and went to a little house far from their other one. That night the door was knocked down by a half giant named Hagrid. Harry, knowing nothing about his parents death was told all about it. Hagrid took Harry to a wizard shopping market called Digon Ally. Soon Harry was told to go to platform 9 3/4, but how could that be possible? Harry soon met the Weasley’s, they are a wizarding family. Harry sat with Ron,who was one of the Weasley’s and they were soon best friends. At school there was so much to see and being sorted into houses was great fun for the boys. But when they meet Hermione and go to the forbidden floor, everything goes wrong. What was under the trapped floor that the 3-headed dog was standing on? What will happen to Harry, Ron and Hermione? Find out in Harry Potter and the Sorcerer’s Stone by J.K. Rowling.

Here is a good book, it is called Peter and the Starcatchers by . It is an amazing book with thrills and chills, romance and suspense. In this 451 pages, there is a story that will last you a lifetime.

Here is the review:

They are boarding one of the most rundown, dirty ships was ever known to the queen. Peter and the other boys are shown to there room. A very small room, just big enough for them to all huddle together at night. They eat grub that has live worms in it, YUCK! Peter goes out to find food and he goes down a passage way. There is the watch man asleep on the ground, drunk. Peter thinks that he may have been guarding the good food and so he goes into the room. All of a sudden he sees a flying rat! He also meets this girl named Molly. She is a girl that has many secrets. And when Peter finds out the biggest one, he must help her save whatever is in this trunk. The trunk, it makes people go crazy when they touch it! To find out what happens when their ship is wrecked, read Peter and the Starcatchers by .

This is one of my favorite books and I m reading the second one in the series called, Peter and the Shadow Thieves.

This is not the 10th book on the top 10 of 2010. I am not going to write a review on it because just by the tittle I don’t think that it is a very good book to do a post on. Sorry!

This book by Natalie Babbitt is one of my personal favorites, Tuck Everlasting, it has romance, adventure and sorrow. I strongly encourage you to read it.

Here is the summary:

Winnie Foster only wanted to go just outside the gate surrounding her yard. She had only been out of the gates to go to town and even then, she could not get out of the carriage. One day Winnie gets up the courage to go out of the gates and into the woods. She soon sees a boy, at first she can not tell what he is doing and then he gets clearer. He is drinking from a spring. She steps out from the bushes. Soon the boy sees her and calls for his mother. Mae and Miles come running to him. Winnie is plopped on top if the horse and is rushed to the Tucks home. Later her parents find that she is no where is to be found. But the Tucks have another problem, can they trust Winnie with a secret? And who is this person in a yellow suit? To find out more about this thrilling adventure, read Tuck Everlasting by Natalie Babbitt.

There is a movie based on the book and it is good also. I suggest that you read the book before seeing the movie, the book is always better than the movie.

This is the cover of the book

Welcome to your brand new blog!

This is a sidebar and can be changed in Widgets in your dashboard.

You can also modify number of sidebars in theme options!